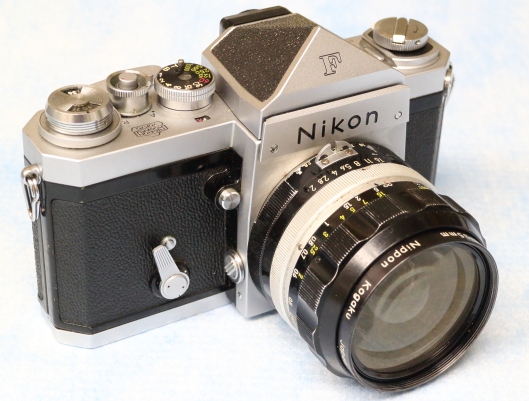 I call this my first because it was the first roll shot purely for pleasure. Two years ago I was using a less-than-wholly reliable Canon Elan 7E, a cheap plastic camera that felt like it too. Nonetheless, despite a reluctant shutter control, it worked as it should.

Here’s a frame from that first roll, Ilford HP5 Plus developed in Ilfosol-3.

I honestly believed at the time that this would be a passing interest. I was heavily invested in digital equipment and techniques and it was obvious from the very beginning that film photographs would not match digital images in terms of absolute sharpness and cleanliness. Grain and dust now affected my images – to a lesser or greater extent.

Yet there was a quality to these imperfect black and white images that was quite different from digital. Perhaps it was the imperfections, although I strove to keep them to a minimum. That was certainly an element. But I think the most important factor was the very different quality of resolution that film brings with it. Deposited silver has a very different structure than a grid of pixels and although it’s not likely to be directly discerned when looking at a normal sized image unless the image is markedly grainy, it underlies every film photograph. It is a different look. A look, what’s more, that never seems to wholly emulated by digital imaging protocols.

So I stayed with film. Stayed and expanded. These days I take three film photographs for every digital one. My film camera collection expanded. In addition to Canon cameras and lenses, I’m now shooting (thanks to a recent gift of a number of manual focus lenses) Nikon cameras. Like the beautiful Nikon F you see at the top of this post. A wholly manual camera. No batteries required. No meter either, so an old Minolta light meter of mine is seeing revived service.

I continue to love the images coming from my films. I’ve taken over 200 rolls of 35mm over the past two years. I love the delayed gratification that accompanies film photography and I love the chemistry involved. Not everyone else does, and I fully understand and indeed sympathize with those who declare film to be obsolete, a dead medium for today’s photographer. Sympathize but disagree.

Here’s a photo from last Saturday, taken with the same Nikon F you see above: Texturally it’s not that different from that first roll of black and white. Over two years, I’ve often shot similar scenes over and over again. Small differences please me.  Good cameras and lenses please me – I love shooting with old equipment. A film shooter is paradoxically living in something of a golden age. Used equipment is absurdly cheap compared to digital, and you never feel compelled to upgrade. Provided you have the skills to take on many of the tasks once handed over photography labs, it’s also surprisingly economical. Economical in scale and cost. In scale because instead of taking fifty nearly identical pictures you take one or two. In cost because you are not caught up in the upgrade circus, feeling driven to replace your digital camera with the latest iteration of bells and whistles. You can buy a lot of film and developer for the cost of a high quality digital camera.

Most of all though, I find film photography to be more fun than digital. Partly because of those very qualities I describe above, partly because I feel linked into a grand tradition and a way of doing things that was established a long time ago. The results are equivalent in terms of artistry – they are simply different approaches. But results are never the sole purpose of photography. It’s as much about process as product.