The road to Avalanche Gulch:

Avalanche Gulch – what a great name that is. Positively reeks of peril, and looking at the darkened entrance between two high craggy outcrops down a long straight gravel road does little to soothe that impression.

Here we are, closer to the entrance. The road is blocked with giant boulders – a little further in, we'll find out why. To the right of the picture, you can see an abandoned mining flume. This is a relic of the gold rush days that led to the founding of the town of Helena in 1864.

Further in, the walls of the gulch rise up high on either side of the path.

The smooth, sheer limestone cliffs are ideal for climbing, and, sure enough, we came across a solitary climber ascending an alarmingly high wall. The sign on his truck indicated that he was a stone mason; clearly, his fascination with rock did not stop at the end of a workday.

His truck was parked just a little further in from where he was climbing. He could drive no further in (and must have already negotiated the large boulders at the entrance of the gulch) because here the road was completely washed away.

The heavy and strong spring snow melt had torn up the surface and even displaced a culvert than was now lying rather uselessly on the creek bed as you can see below. The creek claimed some more than the road and steel pipe as I took this long exposure shot; I accidentally kicked my lens hood into the water and it was swiftly lost to a deep rocky crevice. 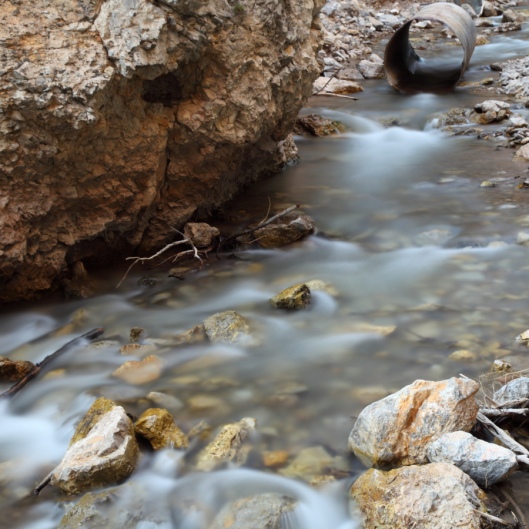 To get further in required negotiated a more difficult path. Here's Geoff on the wooden fence that was used to cross the stream.

The sun was setting lower now, clipping the tops of the crags high above us.

Time to leave. Looking back to towards the Big Belt Mountains, the lowered sun cast shadows that revealed the shallow curvy topography of the lower slopes.