The island is accessible by a single road bridge, the nearer one that you can see in the far distance in the top picture. It's only single track and controlled by a very slow traffic light. When it finally turns, you feel quite privileged to have been allowed across. I've driven all over the island (not hard as there are very few roads) and find it to have a strangely weird aura wherever I go. There is a farm there, but the main landmarks are a very large landfill and the entrance to the eastern side of the old Chain of Rocks Bridge over the Mississippi. The main road that accesses both the island and leads to the old Mississippi bridge was originally part of U.S. Route 66. Now there is almost no traffic at all. Somehow though, the ghost of that old route hovers over the aging and little used road. There are always a few cars in the car lot at the old Chain of Rocks Bridge entrance and some walkers crossing over into Missouri, but that, plus a waterside park that unfortunately was closed yesterday, are the only areas of apparent social congregation.

On Sunday I decided to skip the bridge and take a walk along the levee. It's a straight line all the way down the length of the canal. Very exposed, but I was enjoying this openness on a warm windy afternoon.

As walked up to this salvage barge, previously parked by the canal's side, it decided to start up and head downstream towards St. Louis. I wondered if I'd scared it away!

I set up my tripod and pointed my camera towards it and then down the length of the levee path. I spotted a couple of dots in the far distance. They were coming closer. 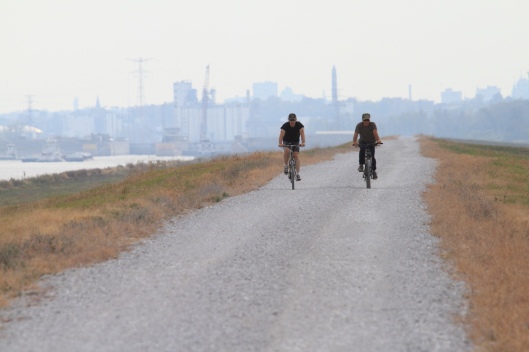 I tracked the cyclists until they whizzed past me with a swift greeting, the only two people I saw on that gravel path that afternoon.

12 thoughts on “Chain of Rocks Canal”