My Saturday afternoon expedition. I wanted to go somewhere new and, in looking, I found New Athens on the Google map not that far from Addieville. The town lies on the Kaskaskia River. Potentially a rather pretty and scenic destination, or so I thought.

Alas, the town turned out to be a rather dusty and scruffy collection of houses, some in rather poor condition. 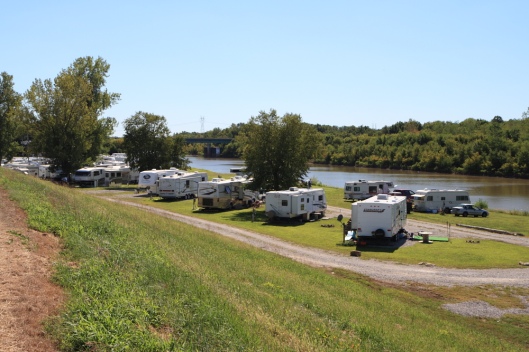 I drove down to the riverside park, strong on sports fields and weak on attractiveness, and climbed up the high levee that protects the lower parts of this fairly large town, spreading, in classic Midwestern criss-cross street style, up a gentle rise.

On the river side of the levee, I came across a R.V. park, again rather unattractive. No thought here, it seemed, to developing the river bank into something more appealing.

I was disappointed. But even the dustiest and nondescript Missouri or Illinois town usually has a grain elevator to enliven the scenery and the one at New Athens was grand.

There were very few people about, surprising considering this was a beautiful warm and dry summer's afternoon. Plenty of insects though, including this pair of butterflies enjoying each other's company. 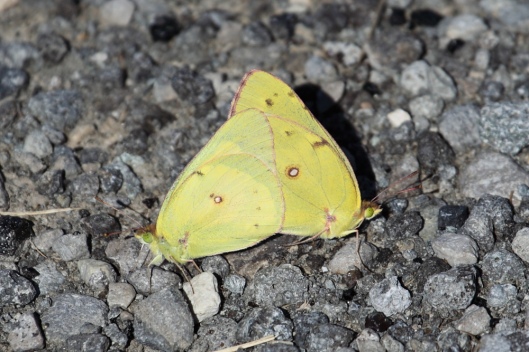 I walked up to the railway line to see the bridge. Not an exceptional structure but I always like to look at a sturdy truss bridge.

I walked onto the track and gazed into the hazy distance in either direction. No sign of train, sadly. I set up by tripod and took a telephoto photograph of the bridge, demonstrating very clearly how the long lens shortens the depth of field so distant objects seem much closer than they really are. 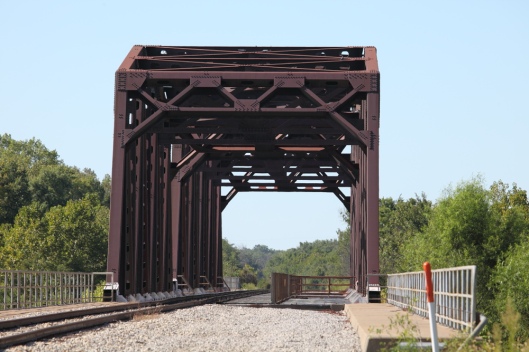 After the mild disappointment of New Athens, I headed off again. Passing, on my way, the striking sight of a cow surrounded by young egrets. I wasn't quite sure why the birds congregated around the large animal. Perhaps it attracted insects that the youngsters liked. Maybe they just liked cows.

I drove south to Baldwin Lake, an entirely artificial pool dug out of the Illinois countryside to serve as a source of cooling water for the Baldwin generating station.

Finally, I found a good number of people there, fishing the shallow water. A very good day to be fishing.

The day was getting on now. I headed west into Red Bud and then down onto the American Bottom to catch the Fort de Chartres before the sun set.

I arrived to find very few people, again. A woman was there fulfilling a project for her photography class that required her to shoot in black and white. She looked a little despondent, I wondered if she'd had much luck. What she was not doing, though, was waiting for the magic hour when the light is optimum for getting a striking photograph.

She left as I wandered onto the site. The shadows were deepening delightfully. I thought about the woman's project and considered what might look good in monochrome.

The walls, for sure.

And this reproduction cart.

I stood on the grounds for some time with only about three other people there. It's a very peaceful place – there is an ambience of calm that I also find in New Harmony, Indiana, on the other side of Illinois.

Then it was time to head home. I took the levee road the whole way to Valmeyer. No one to be seen, not even another car. The sun set over the Mississippi bluffs on the Missouri side of the river. A mist rose above the water. It looked quite magical. A spectacular end to what had turned out to be a very fine day.

9 thoughts on “New Athens and beyond”