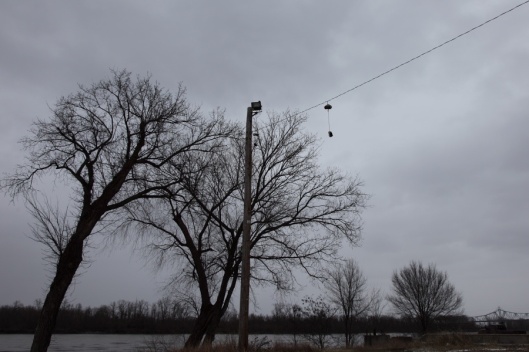 It's been almost uniformly cold and gray during the time that my mother has been here to stay with us. That's been fine up until now – we have a warm fire to sit by and far too much food to eat. Still, she's only here for a couple more days, so we ventured out into the chill for a road trip to Washington, Missouri, for lunch today.

A pretty ride through the snow dusted hills on Highway 94 led us to the Missouri river crossing into Washington. The wind was strong and biting, so we did not dawdle on the pretty downtown streets. We found Cowan's Restaurant and settled in for some lunch and pie. Very pleasant it was too.

After eating, once again, far too much, we headed home taking in the riverfront road on the way out. It was here that Ruth spotted these shoes hanging from the powerline. We drove in closer to have a look. I had never seen such a sight before, but a little research reveals this to be a common phenomenon. All seems like a waste of perfectly good pair of sneakers to me, not to mention a bother for the power company. Perhaps life is somewhat duller in Washington.

I hope that is the explanation; Washington is in notorious Franklin County, home of methamphetamine labs galore, and Washington itself has banned over-the-counter sales of Sudafed and related medicines in an attempt to control the scourge of this awful drug. It would be sad if those shoes were a marker for drug sales. 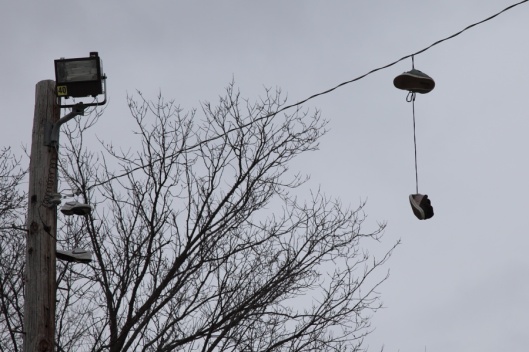