This BBC News article caught my eye this evening.

Switzerland's biggest city, Zurich, has allowed the use of a controversial poster which urges a ban on the building of minarets in the country.

The poster shows a woman dressed in a burka in front of black minarets standing on a Swiss flag.

Evidently, there is considerable controversy about these slim and beautiful towers in Switzerland. Too symbolic of Islam for some, it seems, and threatening too – the poster seems to equate the minaret with a missile.

Absolutely absurd, yet despite (or maybe because of) the fact that about one in four people worldwide is a Muslim, such xenophobic sentiment has traction with some.

Well, I hope that Switzerland gets over its minaret problem and builds as many as it can. Here's a lovely example from Helena, Montana. Not attached to mosque, true, but part of the delightful Civic Center. 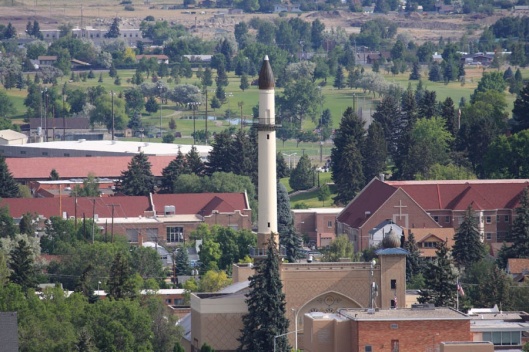