As my visits to England are separated by years, I often take the opportunity while there to revisit some place or area that once I held in great regard.

This year, I decided to stop in the Hampshire village of Bramshott. It was here that my grandparents had a home while I was a young child. I have fond memories of the old house and garden, so I was curious to see how it looked today.

I was on my way to Bishopstone in Wiltshire to meet my wife who was completing a walk along the Ridgeway, and by allowing a few extra hours and taking a southern detour, I could fit in a trip.

It was easy to follow the same route that I was carried over as child, heading out from Guildford through Godalming, down past Hindhead – bottlenecked as it ever was – and then exiting close to Liphook.

As I drove into the upper village, it looked exactly the same as I remembered it 40 odd years ago. I drove down the narrow lane that led past the church and came out onto the road that led to the driveway of the old house, Heronwater.

Just before reaching the stone bridge that crosses directly in front of the garden, I stopped the car and stepped out to walk. It was a gloomy gray day, with water in the air, and that peculiarly English light formed by cloud and rich green vegetation. I carried on to where the driveway began, and here I met a shock. What had been a open access gravel road up to the house was now gated and locked. 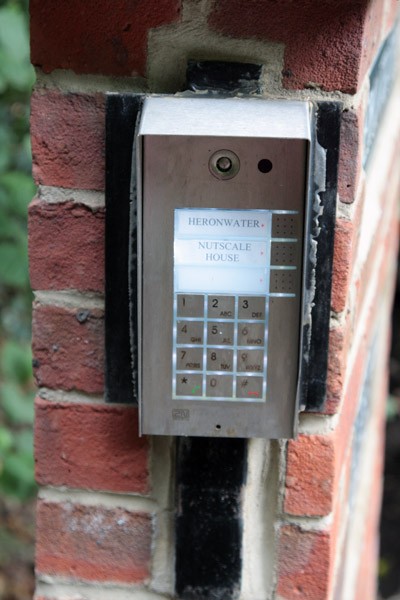 I looked more closely. On the brick gatepost was a key code touchpad and intercom, the only way of opening the gate. I looked around. High wire fences now enveloped the property. No more open access through the woods and garden that I and my sister played through as children.

A deep drainage ditch was being dug around the perimeter. Perhaps built only to cope with runoff water, it had an unfortunate impression of suggesting a moat, further isolating the house from its surroundings.

I walked around, trying to get a good view of the house. None was to be found. Only by peering through some overgrown trees could I make out out the building. It looked exactly as it always had, further increasing the jarring feelings that were generating within me. 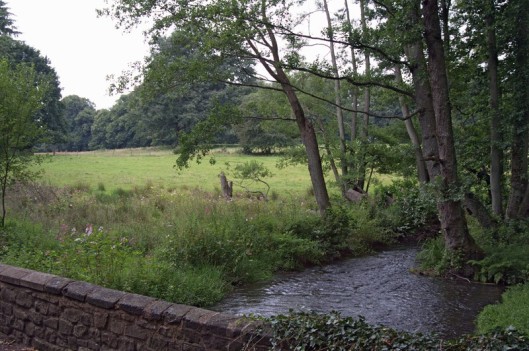 I stood back and looked at the road and the stone bridge I used to splash under when I was a very small person.

Again, the landscape was unaltered. It was just as I had always pictured it.

With little else to do, I explored around the house but everywhere it either fenced off or overgrown. I returned to the bridge and to look on the little river where I would throw sticks from one side and rush excitedly to the other to see them pass under. I once spent hours doing this, but I didn't feel like it today.

As I stood there, several expensive BMWs, Mercedes and Land Rovers passed by. It all seemed very wealthy. It had been when I was a child, but much less ostentatiously and less dramatically removed from the surroundings. The gate and fence around Heronwater took on added symbolism as I contemplated this. I was beginning to feel a deep gulf between what was and had been.

In truth, there always is this gap in perception. 40 years is a long time, and much has changed even if the land has not. England, with its cherished and protected houses and lands, emphasizes this disparity far more than the more volatile United States where houses, fields and land have not yet developed the shielding barriers of history and track human activity much more closely.

I stood for a little while longer, looking away from the house into the field and wood on the other side of the bridge. As I looked, something caught my eye. It was a longhorn cow, much as I had recently seen in Scotland. This was new; clearly a change in farming practice.

I gazed at the cattle. Seeing that large animal in those familiar woods somehow comforted me. I can't explain how. But as I walked back to the car, I felt at ease.

10 thoughts on “Journey to the past”